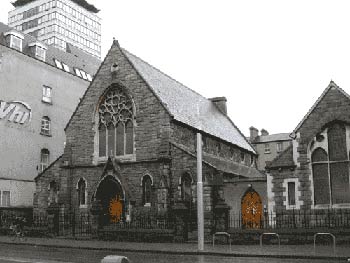 The United Presbyterian Church of Scotland undertook a mission to establish a church in Ireland in 1861. This was made possible by a donation of £1000 given in 1860 specifically to fund such a mission mainly aimed at the Scots living in Dublin. From 1863 the congregation met in the Pillar Room of the Rotunda Hospital. However there are indications that they may have met earlier in Aungier Street and then Whitefriar Street. A formal congregation was installed in 1866 and Rev. James Stevenson became the first minister. Mission work also began in the North Strand area aimed at the many Scots living in that area.

Initially in Albert Avenue, East Wall, then Seville Place and in 1877 a mission hall was built at 31 North Strand.  A site was acquired in 1866 in Abbey Street and a church was built at a cost of £6,000 which opened in 1869. Rev. Stevenson was succeeded by the Rev. William Proctor in 1884.

Due to a variety of circumstances, the Congregation of Ormond Quay & Scots decided to close their church in Abbey Street and to amalgamate with the Congregation of Clontarf. This was achieved at the General Assembly in 2003 and the new congregation to be known as “Clontarf & Scots Presbyterian Church”.