Ormond Quay congregation was first established in 1707 in Ushers Quay after a split within the congregation of Bull Alley. The latter was regarded as one of the oldest Presbyterian Congregations in Dublin, being established at the end of Cromwellian period in 1660.

The Bull Alley congregation later moved to Plunket Street, but after some years of decline elected to merge with Ushers Quay in 1773.

One of the church’s distinguished ministers was Rev. Richard Dill, previously of Tandragee, who was installed as minister on August 26th, 1835. Rev. Dill was a member of a family which featured largely, both in numbers and in ability, in the ministry of the Irish Presbyterian Church. The Dills were of Dutch extraction and their ancestor was a soldier of William III., who settled at Fannet, Co. Donegal.  At one time there were ten Dills in the Irish Presbyterian ministry. 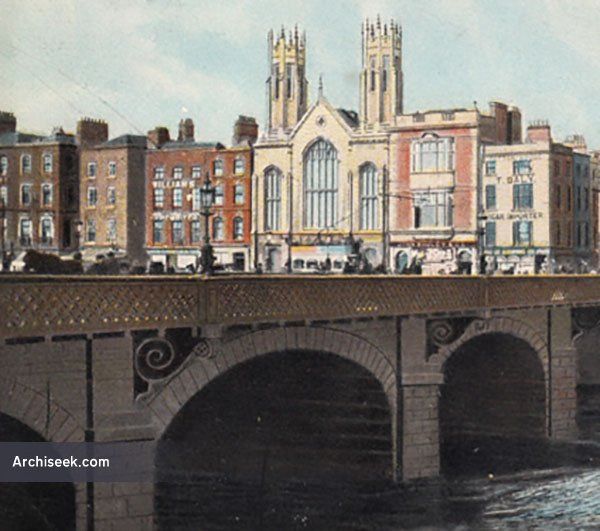 It was during Mr. Dill’s ministry in 1846 that Mrs. Magee, a widow lady of Usher’s Quay congregation, died, leaving £60,000 for Presbyterian purposes, of which £20,000 was bequeathed for Magee College, Derry. Mrs. Magee also left a bequest to the congregation of Usher’s Quay.

Having decided the area around Ushers Quay was no longer suitable, the congregation moved north to Ormond Quay in 1848 using some of the money left to them by Mrs Magee to build the church. It is likely that the Usher’s Quay building was demolished in about 1889 when the street was widened and renamed St. Augustine Street. The Ormond Quay church was built in granite in the gothic style, stood mid-terrace, balanced by two tall elegant towers, one at each extreme of the façade.

Like many inner city churches, Ormond Quay suffered loss of members as they moved out to the suburbs. In 1938 a union between Ormond Quay and Scots Church, Abbey Street was agreed.